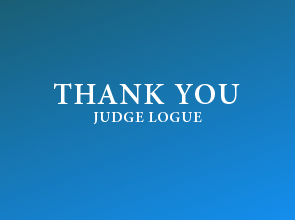 KMMF co-founder, John Kozyak, met Judge Thomas Logue almost 40 years ago while trying to recruit him to join his firm when he graduated from Duke Law School. Judge Logue chose to work for the Miami-Dade County Attorneys Office and said he might just stay a year or two. Instead, he had a distinguished career there for thirty years, before being appointed to the Third District Court of Appeal in 2012. Judge Logue has always been supportive of diversity, inclusion, and mentoring before those terms were popular. The KMMF thanks Judge Logue for his strong support and John still wishes he had been a bit more persuasive.

“As always, John is being too kind. But it is true that meeting John and Barbara Silverman helped attract my wife, Sheila, and me to South Florida forty years ago.
Many people have good intentions but fail to make a dent when trying to address some of our greatest problems. With KMMF, John and Barbara are steadily breaking down barriers and opening doors for talented and deserving young people. I have had a chance to work with KMMF interns. I have seen how well this program works.
Our community is lucky to have KMMF and its dedicated, distinguished Board devote their considerable time and talent to this task. For us, supporting KMMF is a no-brainer.”