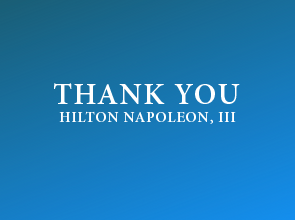 Hilton Napoleon, II and KMMF Co-Founder, John Kozyak, met on the Bricks at the University of Miami School of Law in the Fall of 2002. John had previously assigned a prominent lawyer to mentor Hilton, then a 1L, and Hilton had not followed up. John still remembers their conversation to this day. Hilton described the environment he grew up in as monolithic and he was skeptical about the support he would actually receive from the program. John convinced Hilton to give it a shot. Hilton quickly responded and became a leader in the law school and then our community. Hilton describes his early involvement in the program as one of the best decisions in his life. ﻿KMMF and John thank Hilton for his financial support, for being a friend, and helping to make a difference in our community.

“Joining the KMMF was one of the best decisions that I made in law school. KMMF provided me with a network of attorneys that I would not have had access to otherwise. Now, as a practicing attorney, it is important for me to give back. I encourage every student, lawyer, and judge to get involved!”